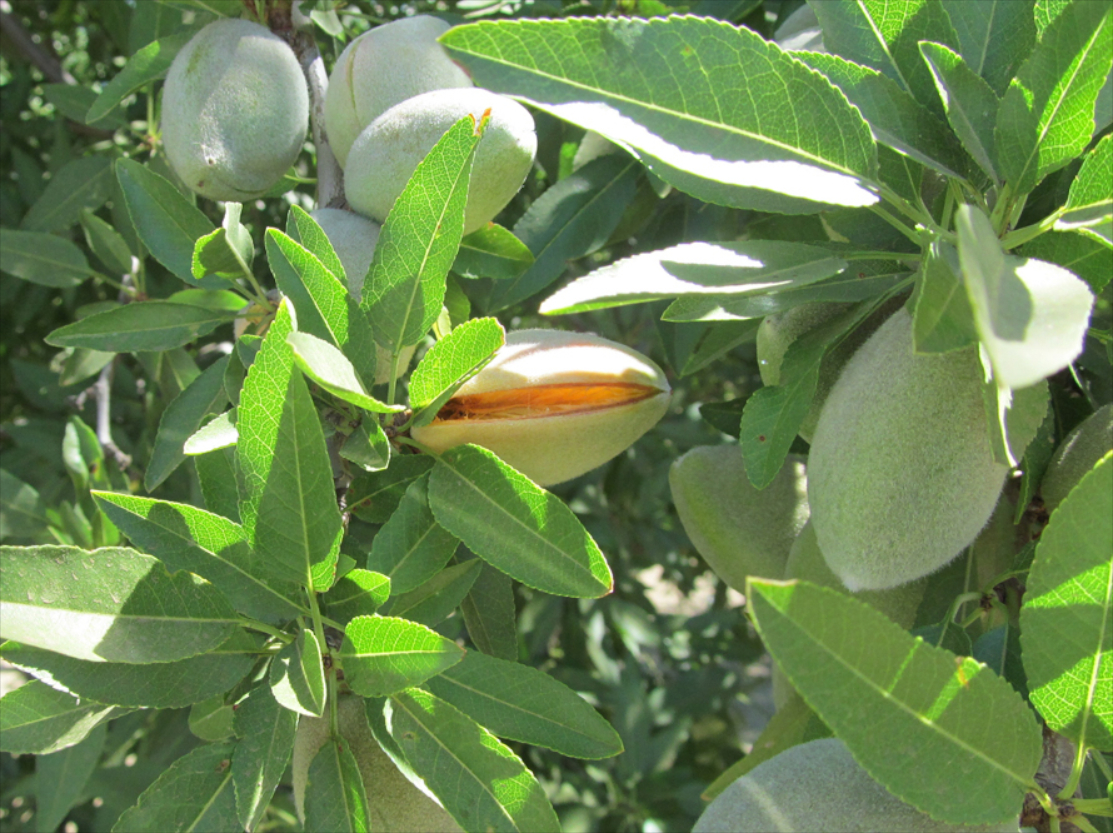 A Nonpareil almond tree with the beginning signs of hull split.

This report covers conditions and observations made between Monday, May 26 and Sunday, June 29, 2014.

Weather – Comfortably mild to seasonably hot conditions ushered in the transition from spring into summer in the Sacramento Valley. Daily maximum temperatures  ranged between the lower 80’s and lower 90’s for much of the period. However, readings reached their highest values for the period between June 4th and 10th, ranging from the mid 90’s to as high as 108 degrees in the most southern part of the region.

In the central part of the region, breezy conditions continued to confound growers on many days during the month. While wind speeds for the most part remained below 10 mph, speeds reached in excess of 20 mph on several occasions, increasing water consumption and raising clouds of dust into the air.

The mild to hot conditions provided ample support for the Sacramento Valley’s developing crop during June, pushing the region’s orchards towards the harvest season. Observers noted hull split in Nonpareil plantings on sandy, gravely soils along the I-5 corridor during the week of June 16th, with split in more vigorous plantings across the region being noted during the final week of the period. Growers have begun treatments to control Navel Orange Worm, timing applications to the splitting hulls and working around days when breezy to windy conditions made treatments impossible.

Water – As with the San Joaquin Valley, growers in the Sacramento Valley have been monitoring their orchards closely and managing their water resources as tightly as possible. Observers have noted that some growers with privately owned wells have had to lower pumps to deeper levels as the water table has dropped. However, widespread, serious difficulties have been avoided.

In the central part of the region, water supplies dominated the growers’ thoughts and words during the period as they worked to support their orchards and the developing crop. While growers in much of San Joaquin County have enjoyed better water supplies than those in other areas of the region, many growers in all areas have struggled to one degree or another to provide adequate irrigations to their orchards. As a result, signs of stress have manifested themselves in many plantings around the region, both from inadequate quantities of water as well as from the use of poor quality water. However, stress levels have intensified as the crop matures. The most typical symptoms observed are the lack of new spur growth in the tree canopy, the cessation of growth in orchards that received adequate water supplies earlier in the season and have now been cut back, as well as leaf burning and defoliation in plantings receiving water with excessive salinity levels. The degree of symptoms varies greatly across the region, with areas along the west side of the region presenting the greatest measure of symptoms.

To the south, observers have reported that growers in the Madera County area have experienced significant difficulties as water levels have dropped and their privately owned wells have failed. As previously reported, surface water in the area is largely unavailable and growers have had to rely on their own wells. In spite of the difficulties, nearly all growers have found a way to get by, with neighbors helping neighbors and well drillers and pump service companies scrambling throughout the countryside.

Crop Development – In the northern part of the region, almond growers and observers are reporting that the crop appears to be running 7 to 10 days ahead of last year and that they expect the first plantings of the Nonpareil variety to be shaken during the week of July 20th. Some have noted that the maturity levels of the pollenizer varieties appear to be following the Nonpareil quite closely.

In the central area, crop development continues to progress, with hull split in stressed Nonpareil plantings first observed during the week of June 16th along the west side of the region. Hull split has progressed across the region, and observers are now reporting splitting in all areas, approximately 7 days ahead of last year.

Growers have been monitoring their orchards for signs of split and the life stages of the Navel Orange Worm in order to promote the best timing of treatments required for control. The lack of adequate rainfall over the past winter resulted in very poor conditions for mummy shaking, the prime method of reducing the amount of worms in the orchards and the potential for damage to the subsequent crop. Treatments at hull split are therefore the last chance to reduce crop losses and the level of contamination in the harvested crop.

Orchards in the south can be found in good condition, many plantings throughout the southern San Joaquin Valley can be found in obvious distress. The most serious stress levels result in defoliation of the orchard. However, the most prevalent symptoms include little or no spur development in plantings that have been deficit irrigated all season long and growth that has stopped in plantings that received adequate water earlier in the growing season and have now been cut back. Wilted trees can be observed in many areas as water consumption exceeds the amount applied. Observers have noted that growers have had to treat many plantings for infestations of web spinning mites, which have prospered under the dry conditions.

The next report is scheduled for Monday, August 4, 2014. However, in the event of any significant occurrences prior to that date, this site will be updated as soon as possible.