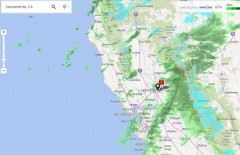 A dry autumn in California…as anticipated

September, October, and November were pretty dry months across most of California. Rain did fall in the north, and the Sierra Nevada did benefit from some relatively modest snows (technically putting us infinitely ahead of last year’s snow total to date of…essentially zero). The precipitation deficits accumulated this autumn add to an already tremendous multi-year precipitation shortfall across California. The region has yet to see meaningful relief from our worst drought on record, and quite a few Californians are getting anxious.  But as I’ve discussed extensively, this year is not like last year (or any of the past four years). The Ridiculously Resilient Ridge has not returned, and the best available evidence suggests that the large-scale pattern over the North Pacific will change very substantially in the coming days and weeks.

El Niño is as strong as ever; California impacts imminent…

First, I want to reassure everyone that reports of El Niño’s demise have been greatly exaggerated demonstrably false. Very much to the contrary, El Niño is presently maintaining its record-breaking peak intensity, and temperature anomalies in the key Niño 3.4 region of the tropical Pacific Ocean are higher on both a weekly and monthly basis than they have been at any time since at least the 1950s (surpassing even the 1982-1983 and 1997-1998 events). Clearly, an extremely strong El Niño remains deeply entrenched in the Pacific–and, as I’ll discuss shortly, California weather impacts are starting to emerge.

But what about our dry autumn? Is that a sign that El Niño is not behaving as expected?

In a word: no. The main reason why El Niño hasn’t yet brought a wet winter to California is that…well, winter hasn’t happened yet! For physical reasons relating to the seasonal cycle of the jet Pacific stream (which I described in considerable detail in my last post, with the aid of illustrations by Emily Underwood), El Niño’s primary influence upon California weather does not take hold until the the core rainy season months of December through March. Thus, we should expect even the strongest El Niño events to exert a relatively marginal influence upon autumn precipitation in the Golden State. When it comes to top-tier El Niño events, patience is a virtue.

It’s also important to consider that the leading seasonal forecast ensembles–including those currently suggesting a very wet January-March period in California–correctly anticipated the dry autumn, suggesting that most of the state would see below average precipitation during September-November. For the most part, these models (and the American CFS in particular) have adamantly insisted that a classic El Niño-influenced pattern would start to develop across the northeastern Pacific rather rapidly sometime during December, becoming well-established by January and persisting for several months. So far, the dry autumn part of the forecast has verified nicely, and the predicted December transition appears to have begun in the real world, as well.

Series of significant storm systems to bring substantial rain, wind to NorCal over next 10 days

A series of fairly impressive North Pacific storms (especially by the low standards of the past few years) will bring widespread rain and mountain snow to much of California over the coming week or so. The strongest storms over the next 7 days appear likely to occur on Thursday and Sunday, although precipitation will fall in between systems as well. A fairly robust system is expect to swing into NorCal from the northwest on Sunday. (NCEP via tropicaltidbits.com)

Rainfall totals over the next few days will likely range from a very hefty  7-8+ inches along the North Coast, 1-3 inches as far south as the Bay Area, and then taper off pretty quickly further south than that (with only light totals for the Los Angeles area). Snow totals in the Sierra Nevada will likely be measured in feet, rather than inches, and there’s a respectable chance that the coming storm series will bring seasonal snow water equivalent up toward average for the date. Strong and gusty winds are also likely in some areas, especially with the Sunday system, and this could cause some problems with drought-weakened trees. As these storms will bring some relatively cold air aloft, there may be enough instability for some thunderstorms across NorCal as minor disturbances pinwheel toward the coast in the wake of the primary cold fronts. All in all, NorCal can expect some highly beneficial precipitation over the coming 7-10 days with relatively few hazards associated with these only modestly strong storms. GFS ensemble mean precipitation forecasts for the next 2 weeks are quite respectable. (NCEP via tropicaltidbits.com)

Additional cold and wet systems are expected through much of next week, and subsequent systems may dig further southward and bring more precipitation to Southern California. There are some early signs that a high-amplitude North Pacific/sub-Arctic high pressure blocking pattern may set up out around day 10, which has the potential to send some very cold Arctic air toward the West Coast (and, perhaps, bring some unusually low elevation snowfall). The details of the long-range forecast are highly speculative at this point given the unstable flow pattern. But there are clear signs that a major pattern reorganization is occurring over the North Pacific, and that there is an elevated potential for active weather over the next 2 weeks.

Long-range ensemble forecasts (from all major international models) are suggesting the development of a large-scale atmospheric pattern over the next 2-3 weeks that strongly resembles the very active and wet one which has been long-advertised by the CFS and other seasonal models for winter 2015-2016. In other words, it appears that El Niño’s influence will finally start to dominate–and significant rains will return to all of California–before the end of December. At present, the CFS is painting an optimistic picture for the latter half of December, with a persistent West Coast trough (yes, you read that right!) and widespread above average precipitation. Monthly outlooks show an even more emphatic trend toward active California weather, with recent forecasts depicting a very wet January-March to come. The Pacific Northwest is currently experiencing its all-time wettest start to a strong El Niño–and major flooding is ongoing across wide region. Much of this heavy precipitation–and perhaps some of the associated hydrological issues–will mostly likely shift southward in the coming weeks.

In short: everything is still on track for a wet winter in California. Rain/snow will (finally) begin in earnest across Northern California this week. It may take another week or two before southern sections of the state start receiving more significant storms, but it really does seem to be only a matter of time. Stay tuned!