Export market attention is appropriately focused on India. Shipments to India for the month of April are down substantially from same time last year. April shipments to India were 6.2 million pounds compared to over 13 million pounds last year. This decrease is driven by the Covid-19 lockdown in March. When India instituted a shut down of services, commerce came to a standstill. Despite proclamations essential services could continue there was confusion in enforcement. A number of India buyers were unable to get workers to their factories and the congested port situation resulted in a significant slow down of shipments from California during the month of April. Consequently, the India almond market will be tighter on supplies in the coming months. This will contribute to clearing the current market situation and present opportunities for buyers to recover from the chaos over the last two months. Since mid-April, there is progress in clearing product from the ports and getting the factories on line. Local transportation is also resuming, with trains and buses now running again. Slowly, the market is clearing goods in the supply chain pipeline.

The EU market continues to see growth with shipments to the region up 8% year to date and Germany posting an impressive growth of 19%. The expansion of the use of almonds beyond traditional baking, into snacking is bolstering the EU gains. China almond imports continues to suffer under the weight of the tariffs that were imposed two years ago. Shipments are down 20% and shipments to Vietnam are down over 75% from last year. China presents the California almond industry a significant opportunity for growth, but a lowering of the tariffs is critical for the industry. The Middle East market is up 25% year to date despite constant geopolitical issues along with Covid-19. The UAE is still the main market in the Middle East with shipments up over 26%.

Ending inventory for the 2019 crop is trending between 430-460 million lbs., depending on the last 90 days of activity. 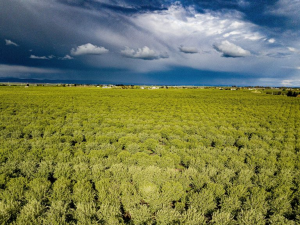 The NASS Subjective Estimate for the 2020 California almond crop was also released yesterday at 3.0 billion pounds. Last year the Subjective Estimate of 2.5 billion pounds proved to be very close to the actual 2019 crop size. Many in the market already anticipated a number in the 2.9 – 3.0 billion pound range for the 2020 crop and it is consistent with Blue Diamond’s outlook. The NASS Objective Estimate is due out on July 7th, but will be viewed with caution after the inaccuracies of the last few years. Most in the industry will move forward into the fall using a 3 billion crop estimate to guide their selling and buying decisions. It will not be until later in the harvest that new data will emerge.