The May ABC position report released this week shows the first dip in California almond shipments in 6 months. May shipments were 153.9 million pounds. (vs. 178.7 in May 2019). U.S. shipments were down 13% after setting records for five consecutive months. YTD U.S. shipments remain up 4.3% over the prior year. Export shipments dipped 14% in May vs. last year, leaving YTD export shipments up 3.7% over last year. For the first time, we see a COVID-19 induced drag on shipments, after experiencing a bit of a surge in March and April. The shipment report was close to expectations for the industry as most anticipated a decline in the range of 10-15% from same month last year.  Prices have declined over the last few months, and more recently have stabilized somewhat as participants on both the buying and selling side ponder their next move.

Although the 2019 crop supply increased by 223 million pounds over the 2018 crop supply, uncommitted inventory is only 57 million pounds higher at the end of May. In addition to the increase in shipments, commitments are also up by 93 million lbs. over last year.

Ending inventory at July 31 is trending to 450 million pounds, up from 318 million pounds last July. Buyers still looking to fill gaps out of 2019 crop are unlikely to find offerings much more plentiful than last year at this time, due to the combination of increased shipments and commitments. Both Nonpareil 23/25 and Butte 27/30 (and/or smaller) are limited in current availability.

New crop commitments are reported at 287 million pounds, compared to last year’s 133 million pounds at the end of May. The selling has been more robust early on the larger 2020 supply. Activity has been strong in North America and the EU, with China and India more recently beginning to gather momentum.

Regionally, India shipments are down 27% for the month. This should help stabilize the local market as it digs out of the logistical congestion that resulted from the initial shutdown across India. It appears much of the chaos caused by defaulted contracts and the shutdown of the country is steadily dissipating. The commercial implications for buyers who have not honored their contracts will be long-lasting as larger California handlers are focusing their business on reputable customers in the Indian market. Overall demand in India for the coming year looks to be strong in spite of the confusion. China is also showing healthy demand for new crop, with shipments for May down 59% when combined with Hong Kong and Vietnam, at current price levels many in this market anticipate increased demand for 2020 crop. Europe is up 6% for shipments year to date as well as the Middle East showing a 7% increase. 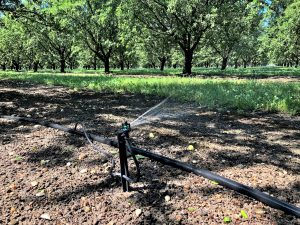 Shipments have been strong, but COVID-19 has cast an aura of uncertainty on the worldwide demand picture in the short-term. As an example, within the US market, there are significant regional differences in restaurant demand, convenience store traffic and bakery distribution. Demand for larger branded players has been minimally impacted. Bakery goods sold through modern retail has increased significantly. Throughout the world, almond consumption in different business segments is moving in different directions.