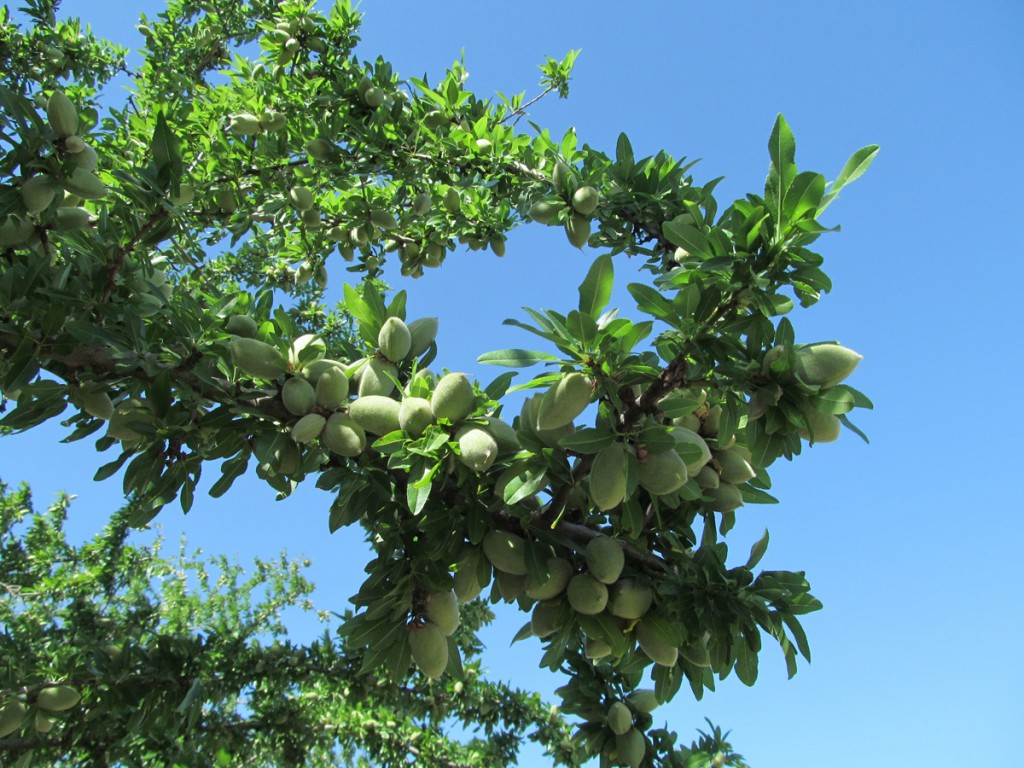 This report covers almond crop conditions and observations made between Monday, April 15 and Sunday, April 28, 2013. The next report is scheduled for Monday, June 3, 2013.

Northern California Almond Bloom Report –  Sacramento Valley almond growers enjoyed dry conditions during the latter half of April, punctuated with periods of gusty winds. Coolest daytime temperatures were reported early in the period, with readings rising from the mid and upper 60’s, to peak in the upper 80’s to 90 degrees by Sunday, the 21st. Conditions moderated slightly during the latter half of the period, dipping back into the upper 70’s and lower 80’s. Morning lows in the southern areas and along the west side of the valley were reported in the mid and upper 40’s as the period began and peaked in the upper 50’s on the warmest days. Readings in the region’s northern areas exhibited a bit more stability with readings consistently in the mid 40’s to lower 50’s. Winds were once again a dominant factor in the region’s weather. Speeds of 10 to 15 were commonly reported with readings on windier days reaching above 25 mph.

Observers are reporting that the winds have provided the only real challenge for almond growers in the Sacramento Valley so far this year. Morning temperatures have remained above threatening levels, eliminating concerns of frost damage while warm daytime temperatures have provided for excellent growth rates. Winds have increased the degree of nut loss and amplified orchards water needs while complicating irrigation scheduling. Growers want to ensure that they are able to keep their soil moisture at optimum levels, but must take wind into consideration when scheduling irrigations to ensure that the trees have the best chance of standing up against the winds. Observers have noted that many plantings of the Monterey variety are shedding nuts quite heavily. While not unprecedented, it is a bit unusual to see the amount of nuts on the ground under the Monterey rows.

Throughout the region, mowers can be observed taking down excessive vegetation within the orchards. Sprayers have also been dispatched on the calmest days, treating for the summer-time fungal diseases Scab and Rust, which must be completed prior to infection. Growers have also stepped up their fertility programs this year in an effort to support the developing crop. Growers are monitoring the tree’s vegetative development and working to employ new protocols developed by University researchers to aid in early season tissue analysis used to monitor their orchards nutritional status.

While in better condition than those in the San Joaquin Valley, Sacramento Valley almond growers are also monitoring their water supplies closely. Growers along the west side of the region drawing their water from the Tehama-Colusa Canal have had their allotments cut to 75% of contracted amounts. However, given that the full contract amount provides for only two acre-feet of water, growers there must increase their reliance their private wells to meet the crop’s water needs. All growers are monitoring pumping levels in their deep wells, with many reconditioning existing wells to ensure adequate supplies throughout the growing season.

Central California Almond Bloom Report – Dry conditions prevailed over the central region during the latter half of April. Daily maximum temperatures warmed during the period, rising from the mid and upper 60’s as the period began to peak in the mid and upper 80’s. Morning minimum temperatures generally followed a similar pattern with readings rising from the upper 40’s to the mid and upper 50’s as the period concluded. However, the morning of Wednesday, April 17th provided the coldest minimum temperatures when readings dropped into the mid 30’s after a day of dry, north winds, which dropped dew point readings to very low levels. Winds were a major factor in the period’s weather, though generally to a lesser degree than was experienced during the first half of the month. Wind speeds of 10 to 15 mph were common during the period with speeds topping out in the lower 20’s on the windiest days.

Observers are reporting that the 2013 almond crop has benefited greatly from the generally warm temperatures the region has received since the completion of the bloom. Morning temperatures have remained above damaging levels while daily maximums have reached above normal values on the vast majority of days. This has produced strong growth rates and relatively advanced maturity levels. While many orchards are still shedding nuts that will not be carried to maturity, the winds that the region has endured over the past month has generally scrubbed the trees clean. Kernels of the Nonpareil are just beginning to solidify. Growers are now waiting for the first and best indication of maturity, which will be noted when the first nuts have become fully solidified. Water supplies dominate discussions in the region. Growers along the west side drawing their water from the federal Central Valley Project will be receiving no more than 20% of their contracted amounts, forcing them to rely on privately owned deep wells. Growers on the east side of the San Joaquin River who receive their water from Sierra Nevada snow melt via local irrigation districts have larger allocations, but still face limits on the total amount of water available. Growers are very concerned about their ability to meet their orchards water requirements should they experience a repeat of the abnormally high temperatures that struck the region during July and August 2012. Well drillers report that they are very busy reconditioning existing wells and drilling new ones.

As mentioned in previous reports, most noticeable within the region’s orchards is the amount of Non-infectious Bud Failure evident in many Carmel plantings.

While the beneficial weather has produced very low bloom and post-bloom disease pressure, the degree of Rust and Scab observed during the past two years has inspired growers to treat their most seriously infected and susceptible orchards, many of which carry the scars of infection lesions on new woody growth. Treatments for these debilitating fungal organisms must be completed prior to infection and growers who have endured the most serious problems have been treating to prevent additional infections this year.

Some observers have noted increased gopher activity in orchards planted in sandy soils. In addition to disrupting the orchard floor, gophers can cause significant damage to root systems, enough to kill young trees and cripple older, mature trees.

Southern California Almond Bloom Report – Dry and occasionally windy conditions dominated the weather in the southern region over the past two weeks. Daily maximum temperatures increased daily from the mid 60’s as the period began, peaking in the upper 80’s to just over the 90 degree mark in the warmest locations by Monday, the 22nd. Readings then moderated slightly to the low to mid 80’s in the period’s closing days. Morning lows exhibited a similar pattern, rising from the lower 40’s to the mid and upper 50’s before settling back into the mid 40’s. Observers noted on aberration in the morning temperatures on Wednesday, the 17th, when readings briefly dipped into the mid 30’s, under the influence of the previous day’s drying winds that reduced dew points to very low levels. Winds reached above 20 mph on several days during the period, causing some nuts to be lost and creating some degree of difficulty for growers.

Irrigation, weed control and fertilization dominated grower’s activities during the latter half of April. Observers have reported that almond orchards in the region are growing well under the generally excellent conditions, with the winds providing the greatest challenge during the period. Observers reported that as in the first half of the month, winds knocked a few more nuts from the trees, disrupted irrigation schedules and simply became a bit of a nuisance.

Water continues to dominate grower’s attention. Irrigation districts in the southern region are all reporting limited delivery seasons and/or reduced supplies. Growers receiving their surface water from the Friant/Kern Canal have had their supply reduced to 35% of contracted amounts, while those drawing from the federal Central Valley Project will receive no more than 20%. Observers have also reported that the Madera and Chowchilla Irrigation District delivery seasons will run for only 55 days. Almond growers will be forced to rely increasingly on their deep wells to meet the orchards water needs. However, growers have already reported some difficulty with their wells as pumping levels drop. Wells are being lowered to draw on descending supplies and new wells are also being drilled.

Growers are monitoring their orchards nutritional levels, pulling leaf samples for tissue analysis using new protocols developed by the University of California to determine fertility needs earlier in the growing season. Fertilizer materials are being applied primarily through the irrigation water by growers having drip or micro-sprinkler systems.

On the subject of pest management, Leaf-Footed Plant Bugs have made their presence known along the east side of the southern San Joaquin Valley, migrating into the orchards from the now drying grasslands. An occasional pest, this insect is capable of causing serious crop losses. The insect is particularly fond of the Aldrich, Fritz and Sonora and growers of these varieties are watching their orchards closely. Growers have noted the presence of adults and juvenile stages in the orchards and have treated as required. Observers have also noted the annual appearance of Southern Fire Ants. Growers will monitor populations during the growing season and treat as needed with bait formulations targeted to damaging species prior to harvest. Growers are beginning to treat their orchards with preventative miticides as well as fungicide materials intended to control Scab and Rust. As with the preventative miticides, the materials for Scab and Rust must be applied prior to infection in order to provide control. Treatments are being made to susceptible plantings with a history of infection.

As in the balance of the Central Valley, almond growers in the southern region with the Carmel variety are all commenting on the degree of Non-infectious Bud Failure visible this year. Many in the region will no longer plant the Carmel due to the variety’s susceptibility to the genetic disorder. There are no methods available to control the problem, which can severely impact yields.