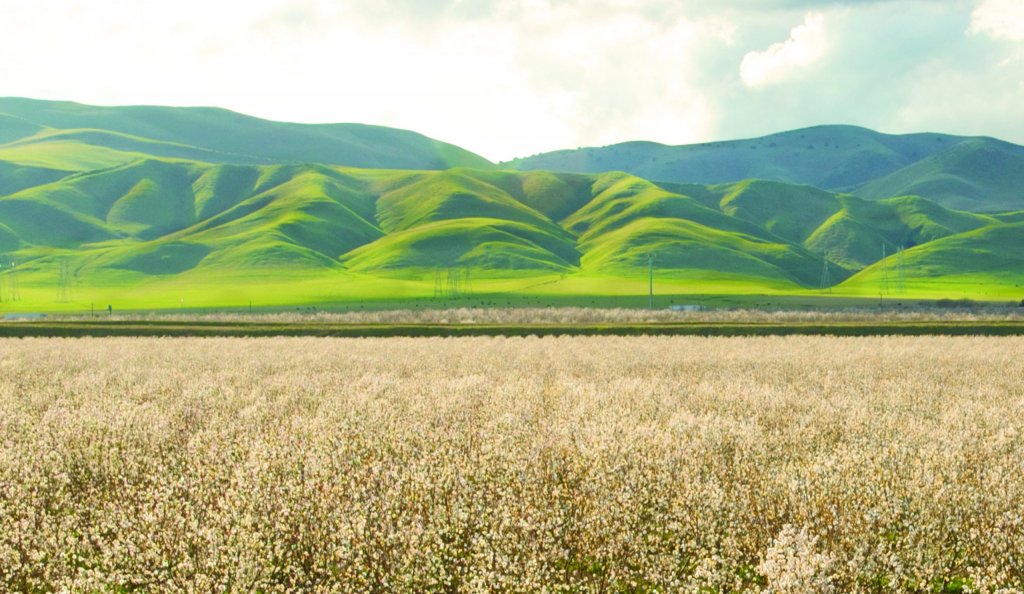 Declines in export markets were widespread with ongoing shipping and logistical issues. Europe was down 50% for the month, and 25% lower for the quarter. The European market pulled old crop strongly last spring and summer filling warehouses at the end of the crop year to combat shipping delays in preparation for the holidays. This market continues to be well covered through the calendar year. China has been impacted significantly with vessel delays and early Chinese New Year demand, citing a 22% decline over last October. California sellers have been unable to guarantee shipment arrivals in the narrow window resulting in a missed opportunity to meet consumption demand for the holidays. Last year, California exported a combined 52 million lbs to China for November and December and it is believed due to the current shipping issues the industry will be hard pressed to get close to that number for this year. The Middle East has also experienced lower shipments due to strong inventories and was down 30% for the month. India on the other hand was somewhat relieved with the latest shipment numbers as it signals more ability to buy. Shipments were down 31% on the month and 17% YTD. Demand continues to be strong with solid Diwali sales. The market is hungry for additional product which should stabilize prices. 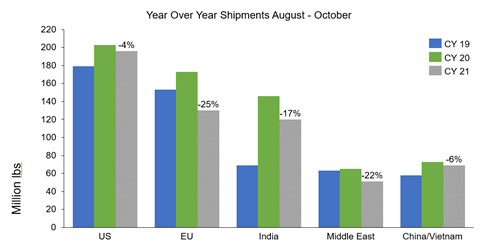 Commitments YTD at 747.9 million lbs which is 285 million lbs behind last October’s advanced levels, and a decrease of 28%. New sales for the month were 244 million lbs, which is only slightly behind last October’s number of 250 million, however 50 million less coming from the export markets. Sold and shipped as a percent of total supply is at 41.8% vs 51.4% last year. Uncommitted inventory is at 966 million lbs up 539 million lbs from a year ago. The industry remains behind on bookings given limited selling early on due to drought concerns. Many markets entered the crop year adequately covered with low priced carry-in volume and early booked new crop causing buyers to back away from early purchases at higher levels. The combination continues to weigh on pricing as the market searches for demand.

Crop receipts for October are trending at nearly the same pace as last year coming in at 1.794 billion lbs versus the prior year of 1.811 billion lbs. There are no new indicators of total crop size, although many expect the crop to come in above the 2.8-billion-pound NASS Objective Estimate. Strong receipts and large carry-in are putting pressure on prices as bin and storage space fills up.