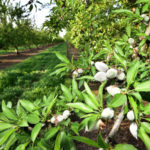 Shipments continue to trend upward for the California almond industry. The March ABC Position Report issued on Tuesday reflects a 10.5% increase in shipments for March compared to last year. The YTD increase for U.S. shipments moves up to 15.4%, with export shipments 30% above prior year. Receipts slowed to an additional 6 million lbs, indicating the crop may reach 2.135-2.140 billion.

New commitments of 135.6 million lbs make it likely that shipment momentum continues through this crop year. Commitments are 4% greater than last March when California reeled off three consecutive months of shipments near or above 170 million lbs each month. If April through July shipments repeat last year’s volume, ending 2016 crop inventory will be very close to 400 million lbs. As indicated in the graph, shipments for the 2016 crop year are likely to grow by ~300 million lbs over the prior year. This year’s California almond supply is 75% shipped and committed, 5% ahead of last year. Consumption of the 2016 crop has benefited from the most moderate and stable pricing in five years. The price stability has results in renewed buyer confidence. Further, it has positioned almonds as the best value in tree nuts now and for the foreseeable future. The positive impact of these factors has already been seen in the rapid rebound in global consumption this year.