OVERVIEW: Monthly Shipments Continue at 125% of Prior Year

Again, in June, California almond industry shipments hit the higher end of expectations, reaching 220.4 million lbs., up 45.1 million lbs. and 25% from last year. YTD shipments are 2,669 millions lbs. With one month remaining in the fiscal year, shipments have already surpassed last year’s record and will exceed 2.8 billion lbs. by year-end.

The increases for June shipments were concentrated in a few markets:

U.S. shipments were up 11.5%, bringing YTD growth to 4.4%. In May and June, the U.S. was lapping COVID-19 impacted shipments from last year and posted significant year-over-year gains in both months. Since February, the U.S. market has been returning to a demand pull more reflective of pre-COVID-19 times, with more than 65 million lbs. of shipments each month. There is increased foot traffic in both grocery and convenience channels that supports the steady growth.

The driver of California industry shipment growth continues to be export markets. For June, the Asia Pacific regions slowed down for the first time all year as inshell and NPX shipments are declining due to minimal inventories. Europe and the Middle East continue to take product at a torrid pace in the latter part of the year. There is some front loading of inventory in Europe to mitigate the shipping delays that continue to be experienced. The Middle East is making up for a slow start with significant June growth in Turkey, UAE and Morocco. 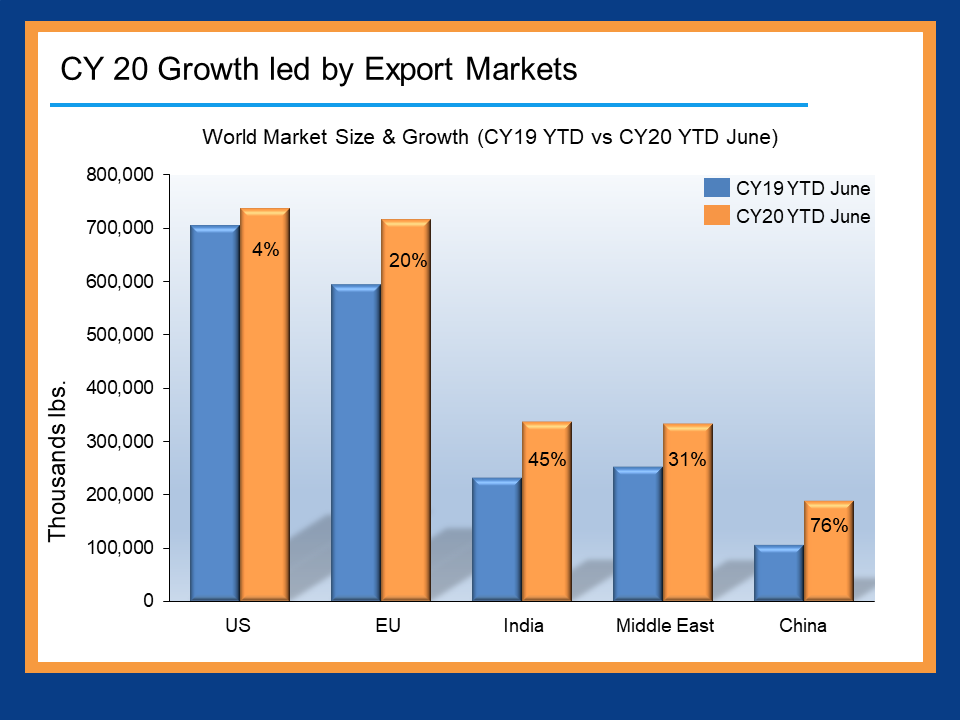