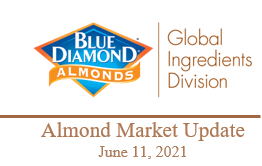 California almond industry shipments in May hit the higher end of expectations, reaching 219.4 million lbs, up 65.5 million lbs and 43% from last year. YTD shipments are 2,448 million lbs. With two months remaining in the fiscal year, shipments have already exceeded last year’s record and will exceed 2.8 billion lbs by year-end.

U.S. shipments continue at close to 70 million lbs per month since March, averaging 67 million lbs per month for the year. In May and June, the U.S. is lapping COVID impacted shipments from last year and will post significant year over year gains in both months. Full year growth will end above 4%, in spite of the negative impact of COVID on modern U.S. retail for most of the 2020 crop year. There is potential for improved growth next year as grocery and convenience store foot traffic that drives snack nut sales is gradually beginning to pick up after being highly restricted since March 2019.

Year to date, the biggest shipment growth has come in export markets. Inshell shipments of 434 million lbs make up nearly 18% of total shipments and are up 47% from last year. While inshell shipments are slowing down due to supply constraints, India remains the leader in growth increasing 112.8 million lbs or 54%, growing the market to 322.3 million lbs. Shelled almond shipments are up 282 million lbs and 20% globally, creating the base for the overall growth of 21.3%.

Europe has increased by 97.6 million lbs, a steadier but impressive 18%. More than any other market, the increase in Europe reflects some response to this year’s difficult ocean freight congestion, with Europeans expanding the amount of inventory they prefer to hold in Europe to minimize production disruptions.

China has been the third largest contributor, up 80.5 million lbs or 80% and continues its rebounding growth from last year. The Middle East/Africa has surged late to 28% growth, up 67.1 million lbs YTD. With the low production of large count Nonpareil kernels favored in these markets, it took longer to accept high NPX 20/22 pricing and adapt to other sizes. Lastly, U.S. YTD growth is at 24 million lbs and will end closer to 35-36 million lbs up by year end. 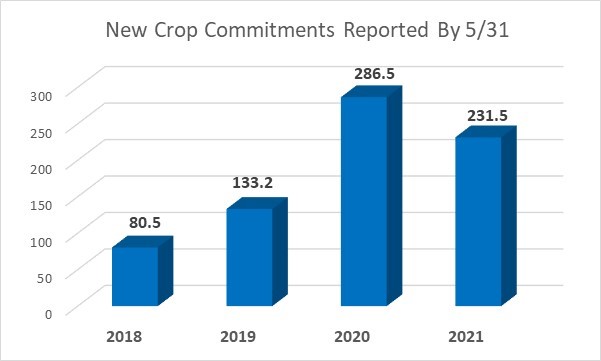 To view the entire detailed Position Report from the Almond Board of California Click here: