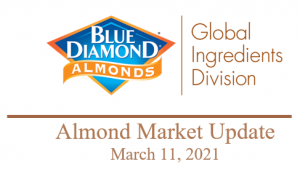 After a dip in January shipments, the California almond industry resumed a strong growth pace in February, shipping 234 million lbs, up 32 million lbs and 16% from last year. YTD shipments remain 16% ahead of last year through seven months, up by 239 million lbs. Once again, significant export volume awaiting containers and rescheduled vessels were delayed and the shipments will be pushed into forward months. Shipping constraints are likely to last for several more months.

Receipts reached 3.087 billion and appear headed to crest 3.1 billion in the remaining months.

The large commitments indicate that there will be greater than average back half growth needed to reach manageable carry-out inventory levels. While the 2020 crop carry-out will likely grow above 700 million lbs as stated last month, it will be coupled with a smaller 2021 crop resulting in a supply that is likely comparable to this year.

With the 2021 crop in post bloom, expectations remain for a crop closer to a high of 2.8 billion lbs as the North and Central areas come off their record 2020 yields. Through March, the last few weeks of uncertain weather will unfold and by early April more definitive outlooks on the size of the 2021 crop will begin to firm up.

To view the entire detailed Position Report from the Almond Board of California site Click here: