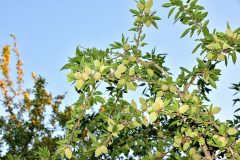 The following excerpts on the drought situation in California come from a recent article by Daniel Swain from WeatherWest.com posted May 19, 2016

Cold low to bring showers, thunderstorms, and Sierra snow in NorCal this weekend.

A relatively cold late-season low pressure system is currently diving southward along the West Coast. This cold low will continue to sink southward over the next 48 hours, bringing with it increasingly unsettled weather conditions across the northern half of the state. Showers and thunderstorms will begin tomorrow at higher elevations and possibly spread across the Sacramento Valley by evening. By later Saturday afternoon, showers and thunderstorms may be pretty widespread across Northern California, likely including most of the Central Valley and much of the Bay Area.

While the reservoirs in California’s wetter, more northern reaches have reached (or are nearing) capacity after a slightly wetter-than-average winter in that part of the state, multi-year water deficits remain enormous. The 2015-2016 winter did bring some drought relief to California, but nearly all long-term drought indicators continue to suggest that California remains in a significant drought. In fact, nearly all of California is still “missing” at least 1 year’s worth of precipitation over the past 4 years, and in Southern California the numbers suggest closer to 2-3 years’ worth of “missing” rain and snow.

What does the near future hold? Well, it’s probably no surprise to anyone on this blog that California’s long dry season has nearly arrived, and that there’s little chance of meaningful widespread precipitation before next autumn at the earliest. It does appear to be very likely that strong cooling of the equatorial Pacific associated with a developing La Niña event will be a major player. Historically, La Niña has yielded a wide range of outcomes in terms of California precipitation–including both very wet and very dry years. But historical observations and climate model simulations agree that there is a definite tilt toward dry winters during La Niña–especially in Southern California.

Needless to say: another dry winter in California would not be good news, so I’ll be following these conditions closely in the coming months.